Seven Dials Market is the latest offering from street food market legends KERB (other markets are available), doors opened on 7th September, and a whole three weeks later I finally made my first visit. 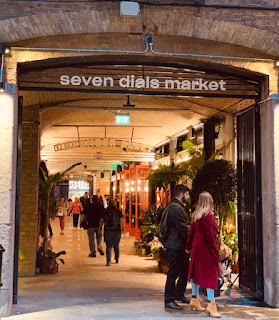 It's set in an old banana warehouse in Seven Dials (hence the name, genius!) in Covent Garden. For some reason it's only now as I write this, two days later, that I realise this must be the reason for the bananas all over the menus and the giant banana inside which is just screaming to be straddled. Yes, i'm slow.

First stop for me was Claw. They do shellfish rolls and shellfish mac n cheese. I went for the lighter option, a roll, and from the lobster, crab and shrimp on offer, I chose the crab because I think it's more flavourful and meaty, and because I personally think lobster is overrated (sue me!). And because this option comes with crispy onions. Crispy onions make most things better.

After impatiently waiting for the buzzer to flash and vibrate off the table, I was presented with a rather nice looking sandwich, crisps and some leaves which I had no intention of eating. You don't want to go getting all full up of green when you're at a place like this now, do you?! 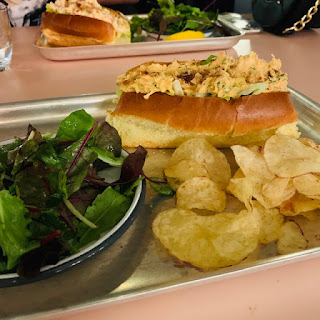 I didn't try the lobster roll, but I'm happy with my crab. It's fucking delicious, and I like the sweetness of the brioche.


'There's definitely gonna be a ring of fire in the morning'..commented the girl sitting next to me on the table, who also apologised for the mess she and her friend were making whilst eating their fried chicken. Turns out they were eating what i'd just ordered from El Pollote - the Buffanero, which is Buffalo and Habanero with Queso Fresco sauce. Oh, wonderful. Spice I like, ring of fire? Not so much. But whatever, i'll worry about that if and when...

The portion of chicken is quite small and is served with Yuca fries (which are delicious) and some purple coloured charred cornslaw (also delicious). The chicken is covered in cheese sauce and scattered with chilli flakes, and so following the lead from my neighbour, I began to scrape some of those chilli flakes off. I'm glad I did because this left the perfect amount of spice for me - there's nothing worse than eating food so hot you can't actually taste it. The chicken is perfectly fried, and the best part, is that it's boneless. I love fried chicken but if there's a boneless option i'll always go for that because I don't like pissing about, I just want it in my gob. 'Your eyes are watering'..observed  my friend. Yes, thanks hun, I am aware. But i'm enjoying this too much to care. 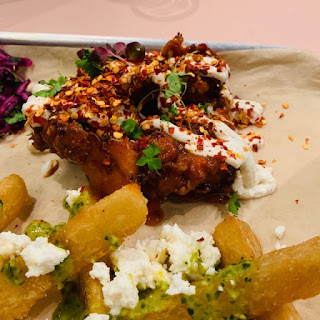 Overall score: 10/10 would eat again. And in case you're wondering, there was no ring of fire. Win.


If you already have some knowledge of Seven Dials Market you will probably know that there's someone in there selling cheese off a conveyor belt, like sushi, but better. It looks amazing!

I fully intended to visit The Cheese Bar and taste some of the British cheeses they had on offer at Pick & Cheese, but as you would expect there was a huge wait. We put our names down on the waitlist as soon as we got there and were told we'd get a text in about an hour and a half. After we had eaten the aforementioned dishes we headed back over as it was almost time. Sadly we were told it would still be another hour at least, so we left. I guess this is a risk you take when you show up at dinner time on a Saturday! But fear not, Pick & Cheese, I shall come back for you!